More than 60 percent of parents would rather keep their children indoors than deal with the cleaning up afterwards, according to a recent survey. It’s a sad statistic, but I get it. When you are constantly wiping down bolognaise covered high chairs and dealing with dirty nappies, do you really need another activity where you both need a bath/change of clothes?

But the thing is, we are robbing our children of a chance to improve their health when we stop them making mud pies. Seventy percent of our immune system resides in our gut and when we increase our exposure to soil we are contributing to our gut health and indirectly our immune system.

In the best-selling book The Dirt Cure, Dr. Maya Shetreat-Klein says ‘ We are in constant relationship with the diverse microbial world around us and within us. That rich microbial diversity is a defining ingredient in our children’s health.’

By walking through green spaces, gardening and playing in the park we ingest small amounts of soil, without even realising it. In fact studies show that the average child consumes approximately 500mg of soil when playing outdoors.  In addition we can reap the rewards of healthy soil indirectly by eating organic vegetables grown in earth rich in microbes and minerals… organic vegetables also require less washing.

Like healthy soil, our gut needs a diverse group of microbes to thrive

Unfortunately today, our sanitised urban living spaces are striping our stomachs of this natural diversity. Hand sanitiser, antibiotics and pesticides have all been linked to lowered immunity and increased rates of allergies. The bacteria we are surrounded by infiltrate our bodies – and our microbiome – through the air we breathe, the animals we touch and the dirt we consume through residue on our hands or the food we eat. Being exposed to a wider variety of these microbes through being in touch with nature, can in turn widen the variety of bacteria in our guts. Interestingly, children raised on farms have fewer allergies and asthma attacks.

The incidence of food allergies has doubled in the last decade could a reduction in bacterial diversity be playing a role? Interestingly, studies show there are less lactobacilli in the guts of children with allergies and certain strains of bacteria have been shown to stop an extreme allergic reaction in its tracks. In a 2014 study looking at mice, a strain of bacteria called Clostridia was shown to effectively suppress an allergic response to peanuts. 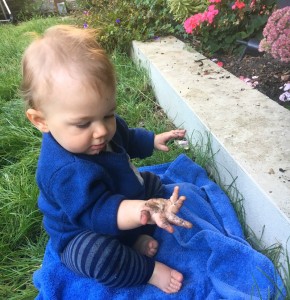 So should you sink your teeth into a mud pie?

To recommend that your child ingests fist-fulls of soil would be foolish and irresponsible – especially considering the wide-spread use of toxic pesticides and poisonous snail pellets about. I only let Ajax get dirty in my own backyard, where no chemicals have been sprayed. He loves it. Digging in the dirt with a spoon is his favourite activity and there’s always something new to see; a worm filtering the soil, a new rosebud, the neighbours cat.. even a fox! He also loves placing small items he finds in a muffin tin I now leave in the garden (it wasn’t getting a lot of use in the kitchen).

For those who don’t have access to a garden, here are four ways you can foster a connection to the earth. 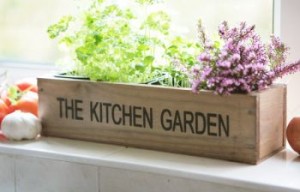 *Pregnant women should be aware that eating soil carries the risk of contamination from harmful parasites called Toxoplasma gondii. This can lead to a disease called toxoplasmosis – which can result in foetal deformities and miscarriage.