Having fed my son Holle organic baby formula with organic goat formula for the first three months (breastfeeding didn’t happen for me), it made sense to move on to Holle organic baby rice when he was four months. Fortunately, Ajax wasn’t interested and, shortly after, I came across research persuading me to look for better options.

Babies developmentally do not have the enzymes to break down the starch complex in baby rice and baby cereal. Therefore you are putting a huge stress on their digestive system and therefore, their immune system.

Since 70-80% of our immune system is in our gut, when you upset a baby’s fragile digestive tract, it can compromise every aspect of their health. Breast milk is made up of protein and fat, so look for foods that are rich in these macros instead.

But the carb content isn’t the only reason to avoid baby rice. Arsenic is the other consideration with rice. This heavy metal can wreak havoc on the body, particularly the lungs, skin, kidneys and liver. Although low levels in food will not affect the average person, when you are talking about a tiny baby, we need to be careful.

Studies show there is a significant amount of arsenic in many rice products and that arsenic levels in the blood directly increase with greater rice consumption. Along with rice cereal, you might want to keep gluten-free breads to a minimum (the majority are made with rice), along with portable snack foods. It’s also worth being aware that numerous pesticides contain arsenic – another reason to choose organic, especially when weaning.

The bland flavour of baby rice supposedly makes it the ideal first food. However, Dr Lucy Cooke, a psychologist and researcher who works with Great Ormond Street Hospital, would disagree. She advocates introducing a variety of flavours and daily changes (rather than introducing one food every four days) from the beginning.

But what if your son/daughter scrunches their nose at more bold flavours? Beetroot purée? Mashed avocado? Liver and bone broth? (These are just some of the first foods Ajax was given).

“We have to persuade mums to ignore the face,” says Cooke in First Bite by food writer Bee Wilson. From four to seven months, there is a window when humans are extraordinarily receptive to flavour, according to studies. But if you delay introducing food till later, you might miss this golden opportunity.

So what should you give your baby for breakfast? 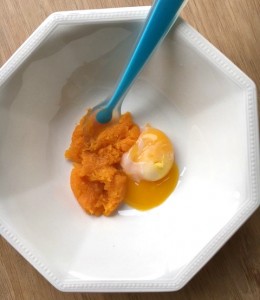 A mini bottle of bone broth (60 ml) is the perfect way to seal a baby’s immature gut. After that, a soft-cooked egg yolk is a healthy choice. Full of omega-3 fatty acids and choline for brain and nervous system development, it’s easy to digest and easy to make. Ajax smiled the instant I first spooned it in.

I’ll be sharing more breakfast ideas in future posts and on Instagram, so stay tuned.